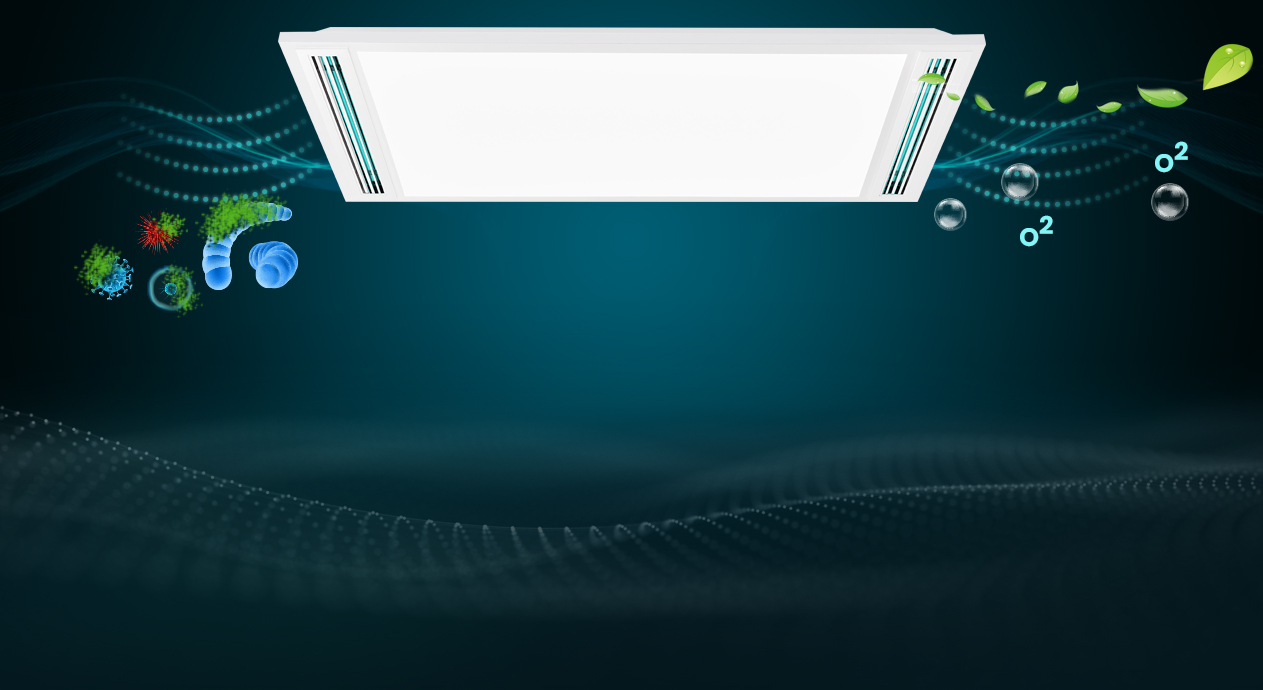 99.9% EFFECTIVE AGAINST COVID-19 AND OTHER CORONA VIRUSES

FOR USE WHILE ROOM IS
OCCUPIED

2. The UV-C Kills The Viruses

UV-C exposure damages DNA and or RNA cell walls and incapacitates the reproduction process. With the virus unable to produce, people stay healthy.

The powerful yet quiet fans constantly draw in dirty air while pushing out clean air all the time. This ensures an entire room’s air is constantly being disinfected even when new viruses are introduced.

We have partnered with DTL Energy Solutions, The southeast's leading LED lighting Contractor to handle all of our Installations, Service and maintenance of our products.

In 1960, the general effectiveness of UV-C on pathogen and DNA was established in a publication by James Bolton and Christine Colton, The Ultraviolet Disinfection Handbook, American Water Works Association, 2008 ISBN 978 1 58321 584 5, pp. 3–4.

The 101 UV-C & LED Panel Light were built according to study parameters to ensure effectiveness.

UV-C Lighting is a thoroughly understood technology recognized by the all Governments and significant standards have already been put into effect to quality products of this caliber.

UL LLC is a global safety certification company headquartered in Northbrook, Illinois. It maintains offices in 46 countries. Established in 1894 as the Underwriters’ Electrical Bureau, it was known throughout the 20th century as Underwriters Laboratories and participated in the safety analysis of many of that century’s new technologies.

The Federal Communications Commission is an independent agency of the United States government that regulates communications by radio, television, wire, satellite, and cable across the United States. The FCC maintains jurisdiction over the areas of broadband access, fair competition, radio frequency use, media responsibility, public safety, and homeland security.

The Restriction of Hazardous Substances Directive 2002/95/EC, short for Directive on the restriction of the use of certain hazardous substances in electrical and electronic equipment, was adopted in February 2003 by the European Union.

is a non-profit organization whose mission is to achieve energy optimization by enabling controllability with a focus on quality, people, and the environment. The DLC promotes high-quality, energy-efficient lighting products in collaboration with utilities and energy efficiency program members, manufacturers, lighting designers, and federal, state, and local entities. Through these partnerships, the DLC establishes product quality specifications, facilitates thought leadership, and provides information, education, tools and technical expertise.

The FDA’s primary focus is enforcement of the Federal Food, Drug, and Cosmetic Act (FD&C), but the agency also enforces other laws, notably Section 361 of the Public Health Service Act, as well as associated regulations. Much of this regulatory-enforcement work is not directly related to food or drugs, but involves such things as regulating lasers, cellular phones, and condoms, as well as control of disease in contexts varying from household pets to human sperm donated for use in assisted reproduction.

The FDA is led by the Commissioner of Food and Drugs, appointed by the President with the advice and consent of the Senate. The Commissioner reports to the Secretary of Health and Human Services. Stephen M. Hahn, MD is the current commissioner, as of December 2019.